AmCham Taipei held a special luncheon on April 18 at the Shangri-La’s Far Eastern Plaza Hotel, to reflect on the important role it played in contributing to the drafting of the Taiwan Relations Act 40 years ago. We were honored to have former Chairman Robert Parker (office title then President) back to reminisce about the events following the U.S. decision to sever ties with Taiwan. He showed video clips of his testimony before U.S. Congressional committees in February 1979 that stressed the need to strengthen the draft legislation prepared by the Carter administration to govern future U.S. Taiwan relations. AmCham urged that the bill include U.S. support for Taiwan’s security and establish a clear legal foundation for interaction between the two governments.

In addition, AmCham at that time stepped forward to ensure that various U.S. community institutions, including the Taipei American School, American Club, English-language radio station, and youth organizations could continue to operate smoothly after derecognition. It’s a period the Chamber looks back on with pride, and one of the prime examples of how the organization works for the best interests of both the U.S. and Taiwan. AmCham Taipei’s 2019 Hsieh Nien Fan banquet, held April 10 at the Grand Hyatt Taipei, paid tribute to the Taiwan Relations Act on its 40th anniversary. The law, which has enabled U.S.-Taiwan relations to continue smoothly without formal diplomatic recognition, was signed by U.S. President Jimmy Carter on exactly the same date in 1979.

The banquet has been held annually since 1970 as a way to express AmCham’s thanks to the Taiwan government for its cooperation in the past year. This year’s event was attended by 682 AmCham members and guests, including 143 government officials.

The New York Times reported on President Tsai’s comments in her speech that Taiwan needs to continue diversifying Taiwan’s economy to prevent over-reliance on China. “We must make sure Taiwan’s economic and security position remains on the right track,” it quoted her as saying.

The President’s speech also stressed the importance of the government’s relationship with AmCham Taipei. “We will continue to work hand-in-hand to find ways to bring more jobs and investment to Taiwan,” she said.

Meale’s remarks cited the remarkably strong commercial relationship between the U.S. and Taiwan. “It is in the interest of the United States to have such an important trade and investment partner that is notable both as a democracy and as a well-run economy,” he told the audience.

In his comments, Christensen noted that Taiwan is the eleventh largest trading partner of the United states, and also “one of the key players in the high-tech global supply chain.” The Master of Ceremonies for the evening was Peter Dernbach. 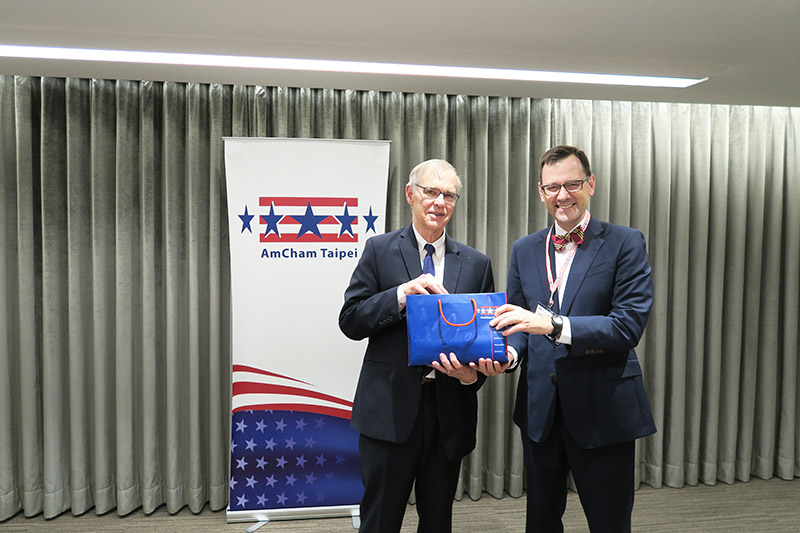 A U.S. team led by Acting Assistant U.S. Trade Representative Terry McCartin arrived in Taiwan on September 11 for consultations with their Taiwan government counterparts on a variety of issues related to bilateral trade and investment. Others members of the group included Tsering Dhongthog, USTR’s Director for Taiwan Affairs, and representatives from the Departments of State, Commerce, and Agriculture.

Co-chairs and other representatives from AmCham’s Medical Devices, Pharmaceutical, Retail, Cosmetics, Agro-Chemical, and Intellectual Property & Licensing Committees provided the visitors with briefings on the current status of their Taiwan White Paper and other issues. This month AmCham Taipei sent out the latest edition of our periodic Memo from Taipei designed to update the Chamber’s friends and contacts abroad about the latest developments here. The Memo went to a mailing list of about 135 people, including Washington-based government affairs representatives from our member companies, as well as U.S. government officials, think tank scholars, and others who follow U.S.-Taiwan relations closely.

The latest Memo announced the appointment of William Foreman as the new President of AmCham Taipei, Albert Chang’s reelection as Chairman for 2018, and the list of other Standing Officers for this year. It also conveyed the following information: