The development of financial technology (fintech) is designed to enhance the competitiveness of the financial sector, but is accompanied by potential risks that give rise to new regulatory challenges.

In a presentation delivered in Chinese, Koo provided an overview of the current status of Taiwan’s financial sector and noted that regulators and supervisors around the world are promoting the growth of fintech while seeking to ensure the safety and soundness of the financial system.

Chairman Koo cited the tasks facing regulators around the world as they respond to the fintech revolution: Even if a flight is smooth, airlines generally recommend keeping your seatbelt fastened in case of any unexpected turbulence. The life jacket beneath the seat is strictly in case of dire emergency.

So it goes for investing in today’s global economy, said Tai Hui, managing director and chief market strategist Asia for J.P. Morgan Funds in his recent presentation to AmCham members at a presentation entitled 2018 Global Economic Outlook: End of the Road or More Room to Run? 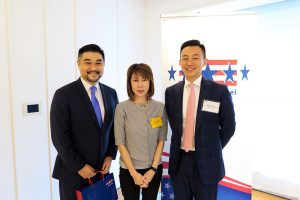 “You don’t know when the flight will get bumpy, and the investment world is very similar,” Hui said at AmCham’s Asset Management & Capital Markets Joint Committee luncheon on March 27 at the Grand Hyatt. “We have to put our seatbelts on – we cannot be complacent. You wear a seatbelt by having a diversified portfolio” that spreads out risks of sudden downturns.

The global economy is maintaining its growth momentum, with synchronized growth expected around the world following from 2017’s strong performance. Extending his flight analogy, Hui said that markets were climbing in 2017, but now they’ve reached cruising altitude. “It’s not the time to worry about wearing a life jacket,” he reassured investors worried about the recent trade spat between the United States and China or about U.S. President Trump’s imposition of tariffs on a number of imports, including steel.

The factors that lead him to remain bullish on investments in 2018 are inflation figures that remain at or below targets in markets around the world, even in the United States, despite the economy operating at nearly full capacity. Wage growth remains sluggish in the United States, where union activity is at an all-time low and the rising “gig economy” of Uber drivers, etc., has crimped wage hikes. But nearly full employment will nevertheless lead to creeping inflation, and Hui anticipates the U.S. Federal Reserve raising interest rates to tighten up the money supply and keep inflation within bounds. Although rising interest rates are often a cause for concern for investors, Hui noted that “when the Fed raises rates, it’s a vote of confidence in the economy.”

For the same reason that tighter money supply points to a stronger business climate, he also parted with conventional wisdom that equities take a hit during money tightening. And while equities in the United States are not cheap, he told audience members that equities on Asian markets are earning 30% more per share than their American counterparts, an attractive bargain. Still the 20% boost to revenues that U.S. companies are currently enjoying thanks the to the Trump tax plan likewise makes them viable targets, and investors now have a wealth of choices.

Even fixed-income products such as bonds are doing well, he noted.

Key concerns are the risk of protectionism or even a trade war between the United States and China, but Hui said that recent negotiations between the two economic behemoths should reassure investors that they will likely work things out. A trade war would contribute to inflation on both sides of the Pacific to potentially disastrous results.

At a joint luncheon meeting of AmCham Taipei’s Asset Management, Banking, and Capital Markets Committees on Oct. 20 at the Grand Hyatt Taipei, Belinda Boa, the Hong Kong-based Managing Director of BlackRock Asset Management North Asia, gave a presentation on “Global Economic Outlook,” providing a briefing on the global BlackRock investment team’s assessment of the prospects for the world economy in the year ahead. Among her key points: Addressing the current state of the financial industry and the policy path forward, Financial Supervisory Commission (FSC) vice chairman Cheng-Mount Cheng told a recent AmCham Taipei luncheon audience that the FSC over the past year has taken positive steps to build a better business environment and stimulate financial product innovation in Taiwan.

The presentation, entitled “The Overview of Financial Industry Development and The FSC’s Main Policy,” was delivered at the Regent Taipei on June 16 at a meeting co-sponsored by the Chamber’s Asset Management, Banking, Capital Markets, and Insurance Committees. Cheng devoted much of his talk to the FSC’s proposed programs for financial technology (“fintech”) innovation. He said that responding to concerns voiced by several fintech companies, the FSC has prioritized implementation of a “regulatory sandbox” – an encouraging space for technological innovation, free of most existing regulatory constraints. Such a mechanism would enable both financial institutions and fintech developers to test new products and services for a trial period of up to 18 months.

Cheng affirmed that fintech is a top priority for the FSC, but that the Legislative Yuan needs to pass authorizing legislation before the regulatory sandbox mechanisms can go into effect.

The Vice Chairman identified the FSC’s main policies as:

Cheng said that these policy priorities are opportunities to bring Taiwan’s financial industry in line with international standards, and even enable Taiwan to become a global leader of financial innovation. “I believe with tech advancing very fast every day, we will see results,” he observed.

While optimistic about the financial industry’s future, Cheng is nonetheless very aware of the FSC’s jurisdictional limitations in shaping that vision. “Many people know that the FSC is in charge of financial markets, but they don’t understand that our capability is quite limited,” he noted.

In a comment for the AmCham Taipei blog, Christine Jih, co-chair of the Asset Management Committee and Chairman & CEO of BNP Paribas Investment Partners Taiwan, said: “Increasing interdepartmental coordination is key to streamlining regulation and strengthening Taiwan’s financial industry. The Vice Chair has been very modest but we all know he has done a lot for the industry. Mr. Cheng is very open-minded and keen to improve this system. This is an industry facing new challenges and new issues every day, and government departments need to talk to each other to keep up with these advancements.”