Representatives of six AmCham Taipei committees had the opportunity on August 30 to discuss their key White Paper issues with their regulators at a meeting presided over by Deputy Minister Kung Ming-hsin of the National Development Council (NDC). The four-hour meeting in the NDC conference room was the first in what will be quarterly sessions until the 2018 White Paper is launched next June.

The government suggested holding the series of meetings to facilitate progress on White Paper issues after learning that none of the 80 issues from the 2016 White Paper had been totally resolved.

The committees and their issues were: August 30, 2017 – The first quarterly meeting with the National Development Council

“The meeting was a great start for the new post-White Paper process, but much still remains in flux,” says AmCham Taipei President Andrea Wu. “We appreciate the Taiwan government’s efforts to actively address our issues, and hope to see early resolution to many of these longstanding challenges.”

AmCham Taipei’s 2017 Doorknock visit to Washington D.C. from June 26 to 30 conducted a total of 45 meetings with U.S. government executive branch agencies (including the State Department, Commerce Department, and the Office of the U.S. Trade Representative), Congressional offices, think tanks, the U.S. Chamber of Commerce, the Taipei Economic & Cultural Representative office in the U.S. (TECRO), and others interested in the U.S.-Taiwan economic relationship. 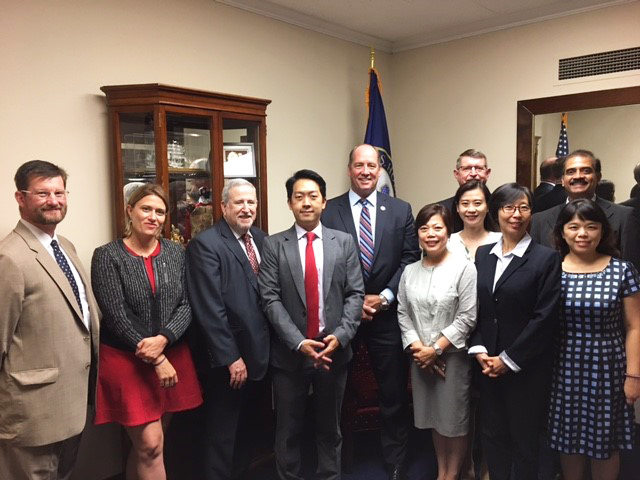 “A lot has changed in Washington since the Trump administration took office, including a new emphasis on targeting U.S. trade deficits with its trading partners, so it was very useful for us to hear from people first-hand about their expectations for the U.S.-Taiwan relationship,” said Andrea Wu. “For the most part, we heard a hard line on outstanding trade issues from the executive agencies, but tempered by widespread expressions of support for Taiwan from members of Congress.” A full report on the Doorknock will appear in the August issue of Taiwan Business TOPICS, both the print and online editions. The purpose of the trip was to meet with the Taiwan government and U.S. business community to discuss the different elements of the U.S.-Taiwan and APEC regional environmental cooperation. Some of the key areas of discussion include 1) Monitoring Air Quality 2) Mercury Pollution 3) Circular Economy and 4) International E-Waste Network (IEWN). Members of AmCham Taipei also exchanged their views with the USEPA officials on corporate sustainability programs and challenges in the region, especially Taiwan.

Representative Lawrence explained that the main purpose of the trip was to make up for her inability to come last year for the inauguration of President Tsai Ing-wen and Vice President Chen Chien-jen. But she and Representative Barragan, whose district is in Detroit, were also looking for potential business opportunities in Taiwan for companies in their districts. As skilled manpower training and port operations are among their particular interests, their itinerary included Taiwan’s occupational training center and Kaohsiung Harbor.

The American Chamber of Commerce in Taipei (AmCham), in partnership with the American Institute in Taiwan (AIT) and the Taipei Economic and Cultural Representative Office in the United States (TECRO), and the Taiwan–USA Industrial Cooperation Office (TUSA), hosted a Technology Licensing Expert Dialogue on March 30.

Building on the success of the second Digital Economy Forum in October, 2016, the dialogue brought together legal and technology experts from the United States and Taiwan to discuss practical guidance on the booming US$5 billion trade in technology licensing. The esteemed speakers included Hong Shu-ming, Director General of the Taiwan Intellectual Protection Office (TIPO) and the Honorable Judge Sidney H. Stein of the United States District Court Southern District of New York, who opened the forum. AmCham Chairman Albert Chang introduced the Business Climate Survey, highlighting key reasons why this year’s report is more meaningful than those of previous years: Taiwan is at a precipice of uncertainty in the international arena, and now it needs more than ever to pick up the pace in improving regulatory issues and attracting foreign investment.

Live video of the press conference, courtesy of McKinsey Taiwan

For this year’s survey, AmCham Taipei invited 412 voting representatives (usually the top executive) of the Chamber’s member companies to answer a series of questions about the business environment in an online questionnaire. In conducting the survey and analyzing the data, the Chamber was grateful for the professional guidance of Independent Marketing & Research.

Each year, we have intentionally asked our business leaders the same, or nearly the same, set of questions. As a result, we have been able to track the degree of progress – or the lack thereof – across key issues over that period. Recently, the Executive Yuan instructed that all draft regulations of trade, investment, and intellectual property rights laws must be given a 60 day commenting period to allow feedback to be gathered from industry and the public. Furthermore, in order to generate the widest possible coverage, the Executive Yuan has instructed that such draft regulations should not only be announced through existing channels but also on its online portal, “Join,” accessible at ( https://join.gov.tw/ ).

Join, developed by National Development Council (NDC) with assistance from the office of Digital Minister Audrey Tang, facilitates two-way communication between government offices and members of the public on regulatory matters. AmCham Taipei is calling  on its member companies, especially those in highly regulated sectors of the economy, to participate in carefully tracking the status of new regulations through join.gov.tw and to work through the Chamber’s industry committees to help prepare well-considered comments for posting on Join.

Through effective use of this platform, Taiwan has an opportunity to boost government efficiency, promote broader participation in public affairs, and create a sounder business environment that may stimulate increased investment leading to stronger economic growth.

For more information, you may also read our Editorial in the latest issue of Taiwan Business TOPICS Magazine here.

Earlier this month, the Executive Yuan (EY) issued a directive to extend the Notice & Comment period for all draft regulations from 14 days to 60 days. Further, effective 10/1/2016, the new 60-day rule will also apply to EY drafts of proposed legislation applicable to trade, investment or IPR matters. Below, please find the original document in Mandarin Chinese and an unofficial English translation for your reference:

For the business community, this promising regulatory improvement has been the change that AmCham Taipei actively pursued as one of our top priorities for the past two years. We see this reform as a sign of the current Administration’s willingness to proactively engage the public and industry stakeholders to improve the regulatory transparency.
AmCham Taipei strongly encourages you and your business partners in Taiwan to take advantage of this great opportunity and whenever possible, make frequent and meaningful comment submission on new and/or existing draft regulations and/or laws.

We are very excited about this new change. If you have any questions, please feel free to contact our Government Affairs department using the contact form on this website or by phone. Contact info available here.

Thank you very much for your support.