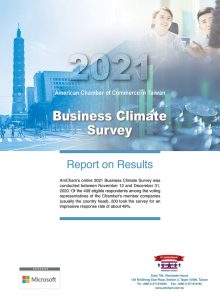 Despite the severe challenges faced by businesses and markets around the world in 2020, member companies of the American Chamber of Commerce in Taiwan are feeling overwhelmingly optimistic about the year ahead, according to the results of the organization’s 2021 Business Climate Survey (BCS).

The poll, conducted between Nov. 12 and Dec. 31, 2020, found that nearly 86% of business leaders were at least somewhat confident in Taiwan’s economic growth over the next 12 months, the highest level since the Chamber added this question to its survey four years ago. Even more notable was that a high 27.6% of respondents said that they were very confident about the coming year.

A similar level of confidence was expressed about Taiwan’s economic prospects over the next three years, and over 40% of member companies said that they plan to increase employment at their Taiwan facilities this year.

Other major findings of the 2021 survey:

The 2021 BCS was sent to 409 of AmCham’s voting representatives. Of those, 200 completed the survey for an impressive response rate of 49%.