Although Europe and the U.S. are experiencing a devastating second wave of COVID-19 cases, Taiwan recently marked 200 days without a local infection. This feat was no accident, and much credit can be given to the hard work of Taiwan’s public health authorities, notably the Central Epidemic Command Center (CECC) headed by Minister of Health and Welfare Chen Shih-chung. The Taiwanese public has tuned in since late January to daily press briefings from Minister Chen and his colleagues at the CECC. He has since become a veritable celebrity in Taiwan, with memes of his likeness spread across the internet, heavy coverage in the local press, and an appearance on the cover of GQ Taiwan in September.

AmCham Taipei was therefore delighted and humbled to invite Minister Chen to speak at a special luncheon at the Grand Hyatt on October 30. During his speech, he stressed Taiwan’s experience combating SARS as a major factor in its preparedness for subsequent virus outbreaks. Yet he also noted the challenges of fighting COVID-19, whose symptoms are often less acute or consistent across patients. And while SARS was contained relatively quickly before it could spread much beyond Asia, the current coronavirus has seeped into every continent besides Antarctica and does not look likely to end before a vaccine is developed.

Minister Chen also noted that besides providing people with regular updates on the status of the pandemic in Taiwan, his team’s daily press briefings were successful in another way: dispelling mis/disinformation. After Taiwan experienced an initial outbreak of COVID-19 in the early months of 2020, misinformation regarding masks and other necessities, as well as more sinister disinformation campaigns about infection numbers and death rates, began to proliferate online. In each case, the CECC was able to quickly counter the false claims and keep the public correctly informed.

At the end of his speech, Minister Chen answered several questions from the audience, the largest gathered since AmCham began its Meet the Minister series this year. The Chamber is incredibly grateful to Minister Chen and his colleagues at the Ministry of Health and Welfare for their immense efforts in keeping Taiwan’s public safe and healthy during these unprecedented times. 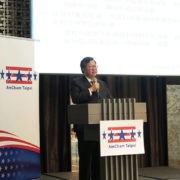 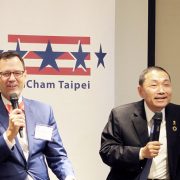 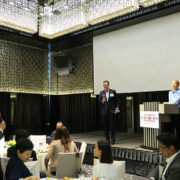 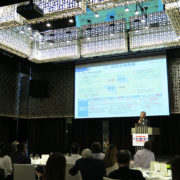 Luncheon with the Minister of MOEA
0 replies