Over 100 AmCham Taipei members attended a special luncheon with recently appointed Minister of Economic Affairs Wang Mei-hua at the Regent Taipei on August 4. Speaking to the attendees, Minister Wang described the challenges to businesses and the economy posed by the COVID-19 pandemic, China’s tightening grip on Hong Kong, the restructuring of global supply chains, and the U.S.-China trade dispute. However, she also highlighted the new opportunities these developments have opened up for Taiwan and its partners, particularly the U.S. 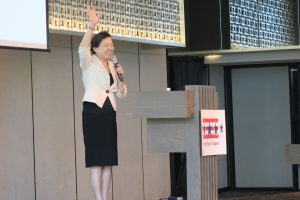 “In light of the pandemic, Taiwanese businesses have had to make big changes to stay afloat. So, it’s not just Taiwan’s government that has been busy lately!” Minister Wang said. Given the government’s adept handling of the virus within its borders, though, she pointed out that of all the OECD countries, Taiwan’s economy suffered the smallest impact in Q2 this year – negative growth of less than 1%. That’s of course not to say that certain industries, such as petrochemicals and real estate, haven’t been more severely affected.

Wang went on to discuss the effects of COVID-19 on tech supply chains which had already begun being reconfigured due to trade tensions between the U.S. and China. The pandemic has accelerated the trend of decoupling, and shifted the focus from long, complex supply chains to ones that are shorter and more secure, she said. Taiwan’s government, seeing the need to act, attracted over US$36.3 billion in investment through three programs geared toward overseas Taiwanese businesses, domestic corporations, and small- and medium-sized enterprises. These efforts have led to the creation of over 90,000 jobs.

Looking ahead, Wang noted the opportunities for Taiwan to deepen its economic partnership with the U.S. She spoke of Taiwan’s attractiveness as a destination for investment by U.S. businesses, emphasizing its strengths in terms of hardware – such as its robust OEM capabilities – and for software, particularly its sizable pool of highly-trained talent. Already, large tech firms such as Google have taken an interest in the advantages Taiwan affords, pledging to collaborate with Taiwan’s government on training AI talent and turning Taiwan into the largest hardware R&D and data center in the Asia-Pacific. And in terms of supply chains, Wang said that Taiwan has become a great source of components for U.S. companies like Tesla; products made by Taiwanese suppliers account for 75% of the company’s key components for its cars.

Wang said that “countries the world over are starting to realize that Taiwan is a reliable partner.” She noted that Taiwan and the U.S. hold shared democratic values, and that Taiwan’s support for an open and fair trade system and complementarity with U.S. industries make it one of the best partners for the U.S. in Asia, and an ideal candidate for a bilateral trade agreement between the two.