The American Chamber of Commerce in Taipei and the Chinese National Association of Industry & Commerce (CNAIC) have issued a joint statement calling on the governments of the U.S. and Taiwan to begin negotiations for a bilateral trade agreement. The agreement was signed September 9 by AmCham Taipei Chairman CW Chin and CNAIC Chairman Lin Por-fong at a ceremony at the Palais de Chine Hotel. It is the first collaborative effort between the two organizations, which represent many of the largest local and international enterprises operating in Taiwan.

The statement acknowledges the importance of the U.S. and Taiwan to each other in terms of two-way trade, which totaled nearly US$43 billion for the first half of 2020. In addition, the two trading partners share a commitment to the principles of fair, transparent, and mutually beneficial trade relations, as well as to upholding democracy and the rule of law, protection of intellectual property, and maintaining peace and stability in the Indo-Pacific region. Taiwan is thus an ideal candidate for a BTA.

Speaking prior to the signing of the joint statement, Chin cited the significance of a U.S.-Taiwan BTA both to the Chamber’s mission and to Taiwan’s economy more broadly. Noting that 2020 marks AmCham’s 69th anniversary, he said that “what’s good for the people of Taiwan is good for our more than 500 member companies.” Also attending the ceremony was Minister of Economic Affairs Wang Mei-hua, who stressed the excellent state of U.S.-Taiwan economic relations, as well as the highly favorable outlook for future investment and bilateral cooperation. 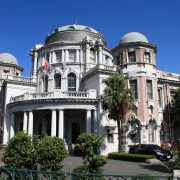 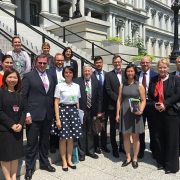 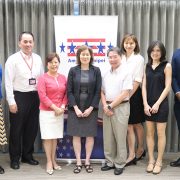 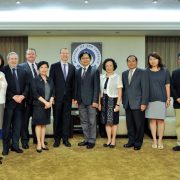