Jim O’Hearn, one of the most prominent members of the AmCham Taipei leadership in the 1980s and 90s, passed away in Arizona on November 14 at the age of 84. He served as Chairman (the position was then called President) of the Chamber in 1991 and 1992. Previously he had been a member of the Board of Governors, chairman of the Chemical Manufacturers Committee, Hsieh Nien Fan emcee in 1983, and Christmas Ball emcee in 1981, 1985, and 1988.

His day job was President of Premier Chemical Co., a subsidiary of Uniroyal Chemical Co. specializing in chemicals for the rubber industry. Jim is survived by his wife of 52 years, Sabrina, children Kevin and Claudine, and four grandchildren. 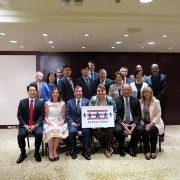