The Ministry of Foreign Affairs awarded Don Shapiro, Editor-in-Chief of Taiwan Business TOPICS and Senior Director of AmCham, with the Friendship Medal of Diplomacy at a reception packed with family, friends and colleagues on November 8. The Foreign Affairs Minister Joseph Wu, recognized Mr. Shapiro for his contributions to Taiwan’s development as a journalist over the last several decades. A transcript of Mr. Shapiro’s remarks is as follows: 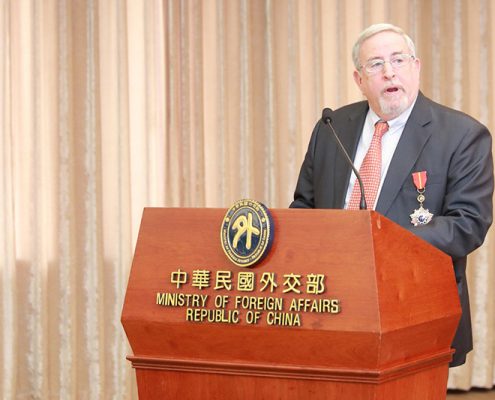 Thank you, Mr. Minister. This is indeed a great honor. I’m glad I decided to stay in Taiwan longer than the originally planned 10 months.

Although I deeply appreciate the recognition, in fact I consider that it was really my privilege to have been in Taiwan to witness the remarkable transformations that occurred here – politically, economically, socially – and to have been able to help make more people around the world aware of those developments.

When I came to Taiwan in 1969, it was an autocratic, one-party system. I got to know a number of former political prisoners, and one of the least pleasant reporting duties I had was to cover trials of civilians brought before military tribunals under martial law.

Then came the emergence of the tangwai, the founding of the DPP, the end of martial law, new legislative elections, and the direct election of the president. Taiwan had evolved into a vibrant, full-fledged democracy. For this former political science graduate student, it was like a living laboratory.

In international relations, Taiwan was steadily losing diplomatic recognition from other countries, but it was replacing it with strong, substantive unofficial relations. In effect, I saw the writing of a whole new chapter in the history of international affairs.

Economically, when I arrived in Taiwan this country was just going through the transition from an agricultural to an industrial society. Fortunately, besides my political science courses, I had studied a bit of economics, so I could also write about the strides Taiwan was making in economic development. I saw it thrive as one of the Four Tigers of Asia and then become a technology powerhouse.

I recall that 1969, the year of my arrival, was the first year in which Taiwan exported more than one billion US dollars worth of products. Now it exports almost that much in a day.

In addition to my international reporting, for 25 years I was a partner in a publishing company called Trade Winds. Taiwanese companies were then very good at manufacturing but not so much at marketing. Trade Winds played an important role in reaching out to importers around the world and introducing Taiwanese export industries and products.

The past nearly 20 years have been with the American Chamber, and this has also been a great experience. There are not nearly enough media covering Taiwan in the English language, and I believe our Taiwan Business TOPICS monthly has helped fill that gap. Our annual Taiwan White Paper always gets a lot of attention, and it’s been gratifying – especially in the last few years – to see how seriously the Taiwan government takes the issues raised in the White Paper and tries to resolve them.

Again, I would like to thank the government for this honor. Taiwan has been good to me. I came to Taiwan alone but met my wife here and we’ve now been married 46 years. From the start I always enjoyed warm acceptance from her family. I believe that as a “son-in-law of Taiwan,” I had the chance to delve more deeply into Taiwan society and appreciate Taiwan culture.

Our two daughters were born in Taiwan. And although under the Nationality Act at that time they were unable to become ROC citizens, they’ve always considered Taiwan to be home. After more than 20 years in the U.S., daughter Debbie last year decided to return and is now working in the Taiwan hotel industry. Daughter Laurie lives and works in Singapore but looks for every opportunity to come back to visit.

I’m also grateful to the AmCham officers and board for their consistent support and my wonderful colleagues on the Chamber staff for their friendship and unflagging cooperation. I would also like to give a special thanks to several people here today – Kang Ning-hsiang and Antonio Chiang. Over the years, I have learned so much about Taiwan politics from speaking with them. I should also put Minister Wu in that category.

As for the future, I have always been an optimist about Taiwan. In my years here, I’ve seen Taiwan confronted with numerous big challenges, and it has always had the resiliency and fortitude to come out okay. I believe that will continue to be the case, especially if Taiwan continues to open up and connect with the rest of the world as much as possible.

Thank you all for being here today, and thank you MOFA for this honor.

智慧零售攻略 Be the Next Smart Retail