Many of the most important people at AmCham Taipei are the committee co-chairs. They are the ones who lead the organization’s 25 industry committees – the backbone of our advocacy mission that aims to make Taiwan’s business environment more open, innovative and prosperous. Each year, the co-chairs spend hours and hours writing e-mails, briefing policymakers, holding meetings and molding a consensus with their peers on issues that are vital to our businesses.

The Board of Governors has decided it’s time to formally recognize the most impactful co-chairs. With recommendations from the AmCham staff, the Board will select two co-chairs who will receive awards at the Annual General Meeting on Nov. 19. The selection criteria will include:

U.S. Senator Ted Cruz, a Republican from Texas and former presidential candidate, became the first U.S. senator in 35 years to attend Taiwan’s National Day celebrations when he visited Taipei on Oct. 9-10. The senator’s visit was part of a swing through the region that also included Japan, India and Hong Kong. After observing the National Day festivities, Senator Cruz had lunch with AmCham Taipei Chairman Leo Seewald and President William Foreman. Also attending was Brent Christensen, the director of the American Institute in Taiwan. Topics of discussion included business opportunities for U.S. companies in Taiwan, the country’s relations with China and the outlook for Taiwan’s economy.

Taiwan is currently facing issues such as shrinking population, aging society, low birth rates, and an imbalance in urban and rural development. In order to address these issues, the Taiwanese government has launched the Regional Revitalization Program.

Every year AmCham Taipei’s Corporate Social Responsibility Committee hosts a forum to enhance members’ understanding of topics relating to social programs and environmental concerns. To raise awareness about the Regional Revitalization Program, the committee held a forum entitled “Fostering Innovation through Community Development” at the Grand Hyatt Taipei on October 2.

This year experts from the Lovely Taiwan Foundation; Taichung Township Long-term Care Foundation; and Wu Wei Wu, a learning center for socially and economically disadvantaged children and teenagers in remote villages in Hualien County, were invited to discuss current trends regarding corporate social responsibility and how the private sector can help promote regional revitalization. Li Ying-ping of the Lovely Taiwan Foundation recalled that following the 2009 typhoon that devastated mountainous areas of Taitung County, villagers originally were hesitant to accept assistance from the foundation, viewing it solely as an organization that hosts music festivals and other events. After talking with residents, the foundation came up with the idea of creating a platform to promote local culture, music, and arts and crafts. Together with the community, the foundation worked to raise funds to convert a dormitory facility for Taiwan Railway employees into what became the “Tiehua Music Village.”

Other speakers at the forum were Gu Yu-jun, professor of environmental studies at National Dong Hwa University and a volunteer worker and promoter of the Wu Wei Wu, and Lin Yi-ying, program leader of Taichung Township Long-term Care, who serves as an advocate for improving long-term care issues for the indigenous population in Taiwan.

Lin shared her experience working to improve long-term care issues for elderly members of the Atayal ethnic group. Besides serving as a volunteer caregiver, Lin also provides training courses for local residents interested in becoming a caregiver. She stressed the psychological rewards of seeing patients recover and helping improve the living conditions of indigenous families.

In a panel moderated by AmCham’s CSR Committee Co-chair Fupei Wang, the speakers discussed some of the challenges non-profits face due to the relatively small size of the Taiwan market – from obtaining funding to choosing the right partners – as well as difficulties posed by various laws and regulations. They urged the authorities and the private sector to work closely together to integrate resources to promote social innovation and economic development. In 2018, Taiwan’s Ministry of the Interior reported that 14% of the island’s population was over the age of 65. That rate is rapidly increasing and is expected to reach 20% or higher by 2026, which could make Taiwan the world’s first “super-aged society.” Such a prospect is alarming, given the vast amount of energy and resources that would be needed to provide adequate care for the growing number of elderly.

In order to address this pressing issue, AmCham Taipei hosted the 2019 Taipei Healthy Aging Forum, held at the Grand Hyatt Hotel on September 27. The forum brought together representatives from the public and private sectors, as well as civil society organizations, to discuss the various challenges associated with an aging society and how to effectively confront these challenges.

In his keynote speech at the forum, Taipei Mayor Ko Wen-je, a former trauma surgeon, noted that Taiwan’s rate of aging is one of the highest in the world. Within 24 years, the number of Taiwanese over the age of 65 jumped from 7% to 14% of the general population. Ko emphasized the importance of accurate government statistics in formulating good elder-care policy, as well as the need to reform Taiwan’s pension system so as to reduce the length of time that retirees are dependent on public resources. Most of the event’s speakers focused on the dire need for a public health framework that includes holistic, integrated approaches to long-term care for Taiwan’s elderly. Dr. Yeh Yen-Po, director of Changhua County’s Department of Health, introduced the program that his department has implemented, which incorporates improving and promoting long-term care services, encouraging healthy living practices, and increasing community involvement. This program has created a more aging-friendly environment in Changhua and can serve as a model for other cities and counties across the island. 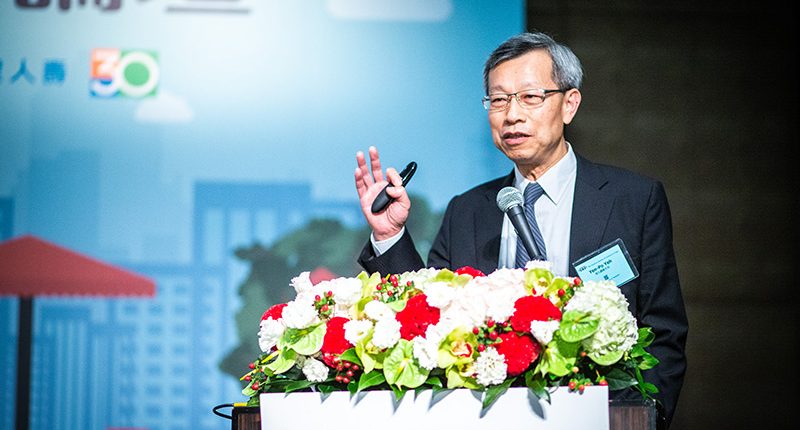 Another topic that speakers addressed was the issue of frailty, the physiological decline that the body undergoes as a result of aging, and how it is affected by a number of environmental and social factors that can be controlled by strong healthcare policies. Participants from industry stressed the important role of public-private partnerships in creating effective long-term care solutions that utilize predictive, preventive approaches, rather than the current model of procedural intervention. Vincent Shih, assistant general counsel at Microsoft and general manager of Microsoft Greater China’s Corporate, External, and Legal Affairs Leadership team, gave a presentation that described how the use of big data and technology can improve the quality of health services for the elderly.

The forum’s platinum sponsor was Amgen. Cigna was the silver sponsor.