In the digital age, false and misleading information can spread to millions instantly and manipulate public opinion. The issue of misinformation or fake news has preoccupied policymakers around the world, especially when it comes to elections.

To help enhance understanding of the issue, AmCham Taipei invited experts to explain different approaches to combating misinformation at a forum entitled, “Tackling Misinformation – Lessons Learned from Germany and Path Forward for Taiwan.” Dr. Ting-Chi Liu, Associate Professor of Law at National Chengchi University, and Dr. Wolfgang Schulz, Director of the Hans-Bredow-Institut for Media Research and Professor of Law at the Universität Hamburg, discussed the legal approaches in Taiwan and Germany to dealing with misinformation and shared their insights on this important matter. Special guests that attended the event were legislators Karen Yu and Lee-Li Feng. Opening the session at the Chamber’s Lincoln Room on February 21, Liu explained the status of freedom of expression in Taiwan and platform liability under proposed draft legislation. He noted the three elements of punishable misinformation according to the Executive Yuan: 1) malice; 2) falsity; and 3) harm.

Schulz gave examples of incidents that led to the German NetzDG (Network Enforcement Act). He explained the regulatory concept behind the law and its importance, as many big players in the tech industry with operations in Germany have recently been affected by NetzDG. 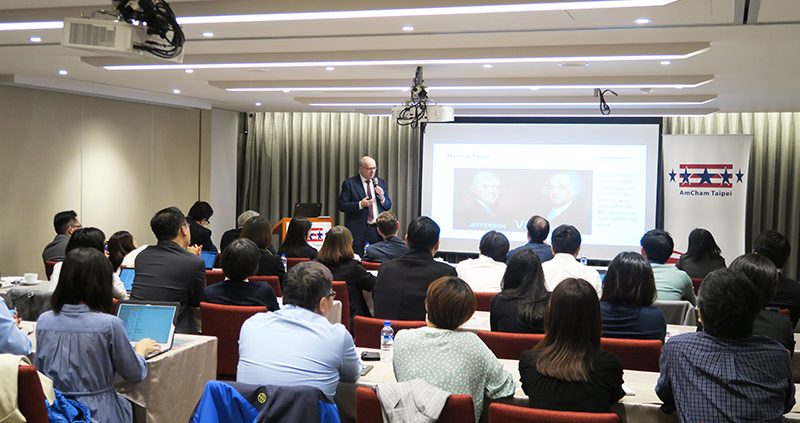 As Taiwan will likely continue to refer to NetzDG in the near future, Schulz highlighted some of the criticisms of the law made by academics and industry experts:

What will be the best approach for the handling of misinformation in Taiwan? Perhaps a 360-degree approach for a more open communication among the authorities, private sector, and the public could strike a good balance between self-regulation and regulation. The event ended with a panel discussion moderated by Jo-Fan Yu, Partner at Baker & McKenzie. Joining the discussion were Dr. Ting-Chi Liu, Dr. Wolfgang Schulz, and legislators Karen Yu and Lee Li-Feng. A group of 24 AmCham Taipei members and Chamber staff took part in a field trip to the Taoyuan plant of Micron Technology on February 15. They heard an excellent briefing from Lin Kiat Yap, Chairman of Micron Technology Taiwan and Vice President of the Boise-Idaho based parent company, about the memory industry and Micron’s leading role in it. Then the visitors donned masks and “bunny suits” to tour the largest cleanroom (20,000 square meters) in the facility.

In his briefing, Yap outlined Micron’s growth from a four-partner startup in the basement of a dental clinic in Boise in 1978 to its position today as the world’s third largest memory company, with annual revenue of more than US$30 billion. The company has 34,000 employees worldwide and holds more than 40,000 patents. Micron has the distinction of being the largest foreign investor in Taiwan. Besides the plant in Taoyuan’s Guishan, it also has facilities in the Central Taiwan Science Park in Taichung. The company has established a Center of Excellence in Taiwan to troubleshoot any production problems found in Micron plants around the world and devise solutions.