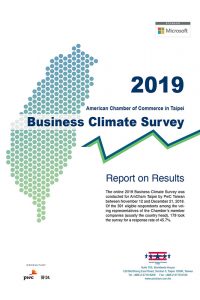 TAIPEI, Taiwan – Multinational business leaders are significantly less confident than last year about Taiwan’s economic outlook over the next 12 months, according to a new survey of members of the American Chamber of Commerce in Taipei.

Only 45.8 percent of those surveyed said they were very or somewhat confident about the economic outlook for 2019 – a 10 percentage point drop from the year before, according to the annual Business Climate Survey by AmCham Taipei.

Many business leaders were more positive about Taiwan’s three-year economic outlook, with 53.6 percent expressing a degree of confidence – mostly unchanged from last year.

Executives were also more bullish about their own companies’ profitability, with about 80 percent saying they were very or somewhat confident about revenue growth over the next 12 months and three years.

Other key findings of the poll: