Communicating complex information is a necessity in any workplace, but often as the amount of information increases, the time to present it effectively decreases. In addition, as more and more companies expand internationally, new audiences and ideas can easily result in information overload and confusing messages – making it more important than ever to connect the bridge between having valuable ideas and conveying them into meaningful stories. Minister of Economic Affairs Shen Jong-chin called on AmCham Taipei on July 13 to brief members of the Chamber leadership on the status of 2018 Taiwan White Paper issues related to MOEA. Accompanying the Minister were officials from MOEA’s Investment Commission, Bureau of Energy, Intellectual Property Office, Department of Commerce, Bureau of Foreign Trade, and Industrial Development Bureau.

Minister Shen offered to meet with AmCham regularly in the future to discuss these and any other pertinent issues in more detail.

The Chamber’s annual “Doorknock” visit to Washington DC this year took place between June 18 and 22. The group held a total of 45 meetings, including calls on the State Department, Commerce Department, National Security Council, Office of the U.S. Trade Representative, dozens of Congressional offices, and leading think tanks. The delegation, which was led by AmCham President William Foreman and Vice Chairman Leo Seewald, was also invited for tea by Taiwan’s representative in Washington, Stanley Kao, at the Twin Oaks estate owned by Taiwan. 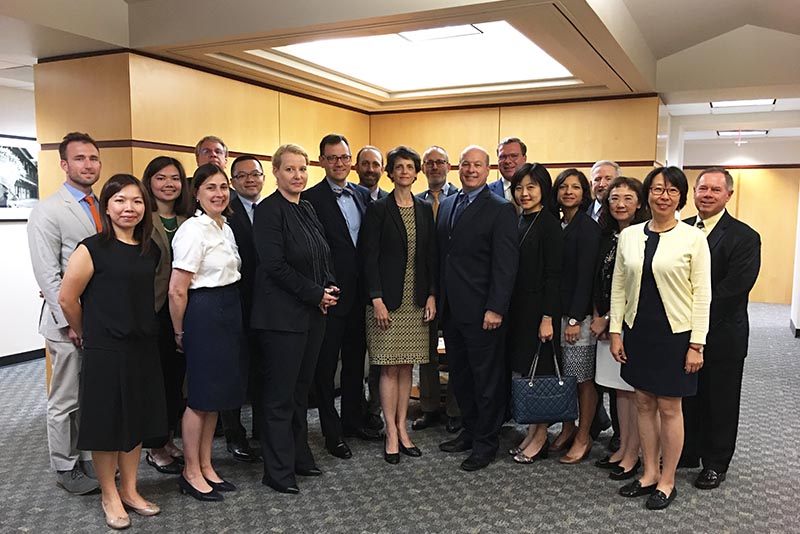 A central purpose of the Doorknock was to remind contacts in Washington of “why Taiwan matters,” including its rank as the United States’ 11th largest trading partner, integral role in the supply chain of major American technology companies, vibrant democracy, and sharing of basic American values. The delegation also urged the U.S. government to schedule regular consultations with Taiwan under the bilateral Trade and Investment Framework Agreement (TIFA) umbrella, explore entering into negotiations for a bilateral trade agreement, and send more high-level American officials on visits to Taiwan. In both executive and legislative branch offices, the group heard expressions of desire to deepen the economic relationship between the United States and Taiwan, especially if existing trade differences surrounding the export of U.S. meat products could be resolved. The delegation was received at the U.S. Trade Representative. For many meetings they were joined by the Washington-based representatives of AmCham member companies or cooperative organizations, including AdvaMed, Amway, Bechtel, Cigna, Herbalife, Medtronic, Microsoft, Prudential, and Versum Materials.

While traversing the halls of Congress, the AmCham Doorknockers met a large delegation of Taiwanese-American businesspeople from the World Taiwanese Chambers of Commerce who were on a similar mission.

Amidst the “machine-learning revolution,” information processing plays a crucial role in transforming products and services to shape a better world. In recent years, machine learning has not only accelerated how technology impacts consumers, it has also created profound solutions for society-wide problems. Leading tech companies such as Google are heavily invested in artificial intelligence (AI) with teams dedicated to research and development of computing systems, which involves understanding of data science, modeling, and distributed computation techniques.

On July 6, AmCham Taipei’s Technology Committee hosted a luncheon presentation at the Shangri-La’s Far Eastern Plaza Hotel by Ed Chi, Principal Scientist and Research Lead at Google AI, on the subject of “How Advances in Deep Learning are Changing How We Solve Problems.” Chi cited a few examples of machine-learning applications that are transforming industries and how we live:

In closing, Chi highlighted that Taiwan’s robust semiconductor supply chain industry will be critical in the machine-learning revolution. With its cutting-edge technology and rich history in semiconductor manufacturing, Taiwan is well positioned to take the lead in fostering advancements in machine learning and growing trends in AI, he said.

AmCham Taipei Tax Committee held a luncheon on July 5 at the Regent Taipei.

境外電商跨境銷售電子勞務課徵所得稅法令介紹– this event was conducted in Mandarin.

Chamber members gathered in the ballroom of the Sherwood Taipei on July 3 for a luncheon program bidding farewell to Kin Moy as he prepares to return to Washington at the end of his three-year tour as Director of the American Institute of Taiwan.

AmCham Chairman Albert Chang thanked Moy, the chief American representative in Taiwan in the absence of formal diplomatic relations, for being “an unceasing friend and supporter of the Chamber.” Chang lauded Moy for his stellar accomplishments during his tenure, including:

Chang concluded, however, that “what makes Kin Moy so special” is much more than those achievements. Using a number of anecdotes as examples, he cited Moy’s warmth, humor, and accessibility. In his remarks, Moy expressed appreciation to AmCham for its close cooperation with AIT, for providing valuable briefings to visiting dignitaries from the U.S., and for holding impressive events such as the annual Hsieh Nien Fan banquet and American Ball. He noted that AmCham provides AIT with many “great ideas” for furthering the bilateral economic relationship – ideas that AIT relays back to Washington.

Moy referred to the recent dedication ceremony for the new AIT office complex as a “historic occasion,” as it confirms that the “U.S. commitment to Taiwan is about the long term.”

On the morning of the AmCham luncheon, Moy was presented with the Order of the Brilliant Star by President Tsai Ing-wen in recognition of his contribution to U.S.-Taiwan relations.

Moy’s successor as AIT director, William Brent Christensen, is expected to arrive later in the summer. He previously served as AIT’s deputy director from 2012 to 2015. His deputy, who has already taken office, is Raymond Greene, who was previously posted in Taipei as deputy chief of the AIT political section from 2001 to 2005.