Over breakfast on Sept. 1 at Shangri-La’s Far Eastern Plaza Hotel, members of the AmCham Taipei leadership met with a delegation from the U.S. House Foreign Affairs Committee led by Committee Chairman Ed Royce (R-CA) and also including Rep. Ted Yoho (R-FL), chairman of the Subcommittee on Asia, and Rep. Jenniffer Gonzalez-Colon (R-PR).

The members of Congress reiterated their support for continued strengthening of U.S.-Taiwan ties in the areas of both national security and economic cooperation.

Following a briefing by Chamber Chairman Albert Chang on the current business climate in Taiwan, Lin Kiat Yap of Micron gave a report on challenges facing the Taiwan semiconductor industry (a key part of the supply chain for many leading U.S. tech companies) and Wayne Chin of Bechtel provided a presentation on behalf of the Energy Committee and Infrastructure & Engineering Committee. 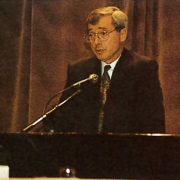