An AmCham Taipei delegation led by Chairman Dan Silver met with Premier-designate Lin Chuan on April 8 to brief him on some issues impacting the business environment in Taiwan. Lin was accompanied by Dr. Shih Jun-Ji, who will serve in the new government as one of the Ministers without Portfolio.

The discussion covered the following issues:

“We were honored to have the chance to meet with the prospective new Premier even before his taking office. Dr. Lin was already familiar with many of our issues from reading our Taiwan White Paper, but it was an excellent opportunity to offer further explanation. We look forward to frequent and positive interaction with the new government in the months ahead.” — AmCham Taipei President Andrea Wu

The delegation consisted of: 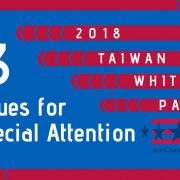